The history of coffee

According to one story, the Archangel Gabriel woke the Prophet Mohammed from his sleep with a cup of coffee. The drink had such a powerful tonic effect that it not only woke the prophet up, it also gave him the strength to defeat 40 men with one blow.

According to the most widespread legend, it was goats that first made the coffee plant popular. The story took place in Kaffa province in south-western Ethiopia, where the goats ate from a number of low-growing trees bearing silky leaves and red berries. However, this made them so excited that it took the goatherd a long time to calm them down. He was amazed by the plant’s effects and decided to try the berries himself — they turned out to be tasteless. Despite this, the goatherd noticed that eating the berries from the unknown plant left him invigorated for quite some time. Monks from a nearby monastery heard about this phenomenon and, after several attempts, discovered that if roasted, ground and brewed, the beans produced a drink that helped them to stay awake during long hours of prayer. It was most likely this capability that made the drink popular in other monasteries. 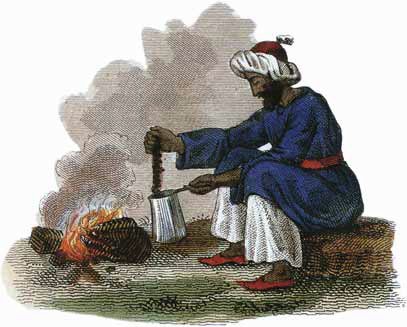 All of this is legend, of course, although most modern researchers hold the opinion that the coffee plant originated in Ethiopia — where it can still be found growing wild today. From Ethiopia, coffee made its way to Yemen, where coffee’s geographical and agro-industrial spread began. The roasting of coffee beans started incidentally. When coffee branches were burnt on campfires, roasted coffee beans were found in the ashes; these were then chewed or used to make a tonic drink. With the invention of roasting and development of brewing methods, coffee won the hearts of the Yemeni people and became a source of national pride, while the brewing process became a national ritual.

For two centuries, Yemen was the only country supplying coffee to the world market. From there, coffee began to spread to every continent of the globe. To a large extent, this was made possible by the favourable historical circumstances of the time. Yemen was situated on important trade routes from East Africa and South-East Asia to the Middle East and Europe. The use of coffee spread all the way to the holy cities of Mecca and Medina, where initially it was also used to prevent worshippers from falling asleep during prayer. However, the residents of these cities liked the new drink so much that they began to consume it for reasons other than religious ones. It is important to remember that for Muslims, alcohol was — and still is — prohibited, so the introduction of coffee to the region was hugely successful and it has since become part of the national tradition.

We owe the word «qahwah», meaning «infusion», to the Arabic language. The Turkish people modified the name slightly, calling it «qahve», which soon after became «caffè», «café» and «coffee» in Europe. 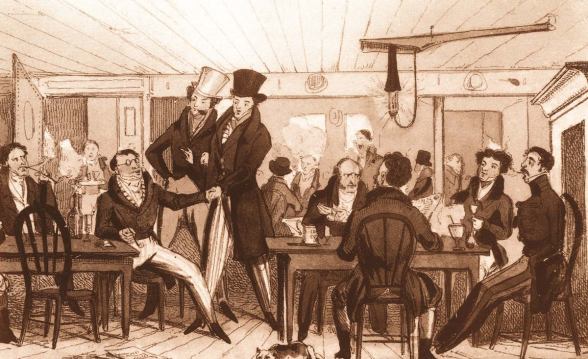 Europe first learned about coffee in 1548 from a treatise on Turkish drinks written by the Italian Giovanni Antonio Menavino.

Italy. The first cup of coffee in Europe was brewed in Rome in 1626 by Pietro della Valle, who had become accustomed to everyday coffee drinking while serving as the Pope’s ambassador in Iran (Persia) and had become skilled at brewing it himself. Coffee houses gradually opened up in the Mediterranean ports. Venice acquired one in 1615, Rome in 1626. Opponents of coffee approached the Pope, hoping for a ban. However, the Pope liked the drink and blessed it. The first coffee houses opened in Venice and then spread throughout Italy.

England. Coffee was brought to England via maritime trade. Tellingly, the initial introduction of coffee into European gastronomy was accompanied by the idea that coffee had a beneficial effect on people’s mental abilities (an effect that has since been proven). Coffee shops therefore became particularly popular in university towns. In particular, Oxford saw the opening of a coffee house in 1637. In the 18th century, however, the English population turned their interest to tea.

It was only some time later that France began to turn to coffee. The story goes that the French royal court was introduced to coffee during a reception at the Turkish embassy, thanks to the ambassador’s Armenian chef. Louis XIV ordered that coffee be added to the menu at the Louvre Palace. The fashion for coffee then spread rapidly across the country. Although coffee was expensive, it slowly made its way into other parts of society. Coffee shops began to open up where, as in Turkey, coffee not only offered drinkers a unique flavour — it also gave them an opportunity to socialise, debate and discuss local news.

Germany. Coffee appeared in Germany, as in many other European countries, in the 17th century. The first café was opened in 1673 in Bremen. The drink quickly spread, starting in the ports and then throughout all of Germany. Coffee house culture also developed quickly in Germany, with cafés becoming a customary place to meet for coffee and biscuits. Many works of literature were written on the adoption of coffee in Germany. Coffee was also the subject of numerous musical compositions, of which the most famous is Johann Sebastian Bach’s «Coffee Cantata». Coffee first entered Austria as a war trophy. In 1683, following the second, unsuccessful Turkish siege of Vienna, the city’s inhabitants found bags of coffee abandoned by the Turks. A man was found who had been to Istanbul, who then taught the Viennese how to make the coffee into a drink. The citizens of Vienna, who love nothing more than putting their own twist on new discoveries (Viennese waltz, Viennese bentwood chairs, Vienna rolls), immediately created a new recipe for coffee — Viennese coffee. Coffee began to be served in small porcelain cups (incidentally, also said to have been invented in Vienna) with whipped cream.

Appearance of coffee in Russia

Coffee was slow to spread, initially hampered by religious prejudice. At first, coffee was only taken as medicine on the advice of doctors. It was Peter I who made the decision to distribute coffee more widely. He had acquired a taste for the drink while in the Netherlands, and on his return to Russia made it a custom at his assemblies, at first practically by force. However, as the Western way of life became more widespread, so too did the habit of drinking coffee — most frequently in the afternoon. This tradition became even more embedded after the war with Napoleon.

Share:
Caffeine. «FOR» and «AGAINST» — harmful or beneficial?
Previous