The first lucky owner of... A CAR!

The first grand prize winner in the «Jockey» brand’s major promotion, «Get your hands on prizes» (Заведись на призы), has been revealed.

The winner of one of the three cars was 66-year-old Aleksandr Merlyan. Aleksandr arrived in Moscow by plane from his native Lipetsk to attend the award ceremony, and drove back home in a snow-white Volkswagen Tiguan. The winner confessed that he had secretly hoped he would win such a valuable prize from his favourite coffee brand, «Jockey», but didn’t believe he would ever be so lucky. When he received the message that he had won, he said at first he thought it was a joke. But no, here at the «Jockey» brand, we’re deadly serious! His happiness at this unexpected and joyful news was shared by Aleksandr Merlyan’s large and close-knit family, including his wife, two adult daughters and grandchildren. The winner was accompanied on his trip by one of his sons-in-law. While Aleksandr Merlyan is an experienced driver, he is used to driving only manual gearboxes; as his new car is an automatic, his son-in-law offered to help out. Any fears he had were totally unfounded, however, and he had no problems.

Aleksandr Merlyan is a man with a wealth of life experience, having served his whole life in the armed forces. He considered it a special sign that he was presented with his prize on the eve of Defender of the Fatherland Day. Our «Get your hands on prizes» (Заведись на призы) campaign continues. Every day you have the chance to win one of half a million prizes. Two more car prize draws are also yet to come (in May and August). For more information and rules, visit жокей-промо.рф. 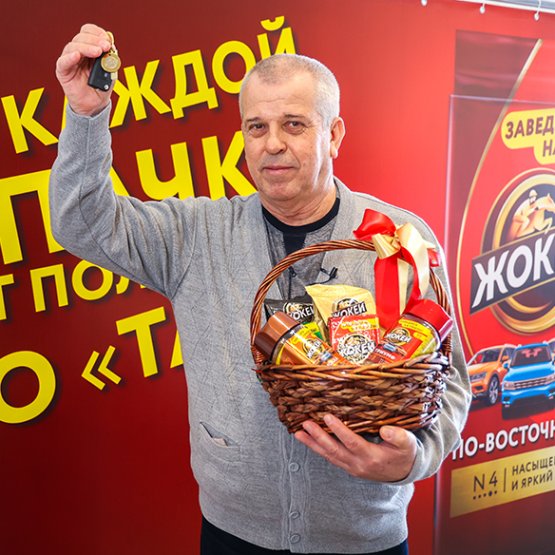 Coffee Jockey
TRIUMF
Instant 450 g
Share:
Get started and go!
Previous
«JOCKEY» AT THE TEA AND COFFEE FESTIVAL
Next